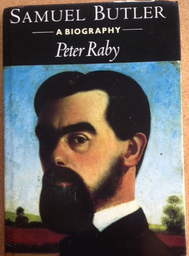 Samuel Butler (1853-1902), the famous author of Erewhon and The Way of All Flesh, was one of the 19th and early 20th century's satirical and critical authors. He also wrote a number of books that directly criticised Charles Darwin for plagiarising the prior-published work of his influencers on the theory of macroevolution by natural selection. Those books are the subject of this page.

In his biography of Butler, Peter Raby (1991 pp. 2-3) writes 'The impulse to explore and discover, preferably in isolation, characterised his restless cast of mind. If some grand obstacle loomed on the horizon, mysterious and foreboding - the Anglican God, the Victorian family, Darwin, Homer - he set out to investigate for himself; and he would come back from these mental expeditions, having mapped out the territory to his own satisfaction, to announce to an uninterested world that the mystery had been solved.'

Interestingly, Samuel Butler's grandfather (Dr Samuel Butler) was the headmaster of Charles Darwin's Shrewsbury school. Butler's father, Thomas Butler, was a classmate of Darwin, went to Cambridge with him and joined him hunting for insects in Wales. 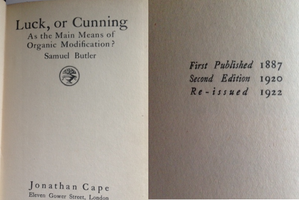 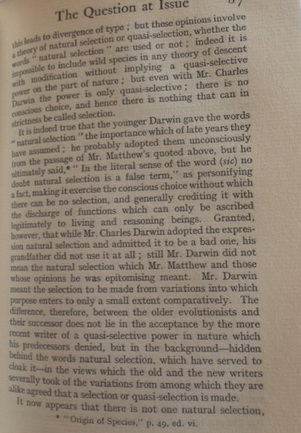 Page 87 of Luck and Cunning

Above we see Butler suggesting on page 87, (as Darwin's biographer Clarke later did) that Darwin suffered from cryptoamnesia when he plagairised Matthew. You can read a relevant blog post on this page of Butler's book Here) 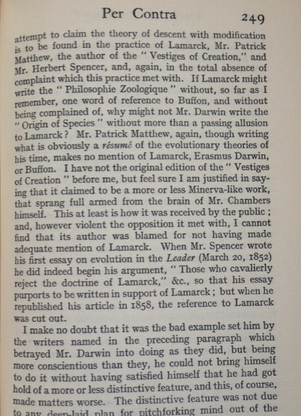 On page 249 of his 1887 book 'Luck or Cunning' (see left image), Samuel Butler quite rightly points out the historic habits of plagiarism among key writers in this particular field. Not only was Darwin a dreadful plagiarist, who passed the theory of others off as his own, but so did Matthew and those who came before both of them.

The key point Butler failed to comprehend, however, is the fact that (as Sir Gavin de Beer, Ernst Mayr and Richard Dawkins all later showed) only Matthew was first in published print with the complete theory of macroevolution by natural selection.

Butler also failed to realize precisely what Darwin and Wallace stole from Matthew's totally original work and the number of their prior-influencers, influencer's influencers, friends, and even Wallace's Sarawak paper editor - Selby - who prior read and cited Matthew's (1831) book and the orignal ideas in it (see Sutton 2016) before Darwin's' and Wallace's great science fraud by plagiary and lies.

What Butler failed to know without the benefit of my BigData IDD method is that Matthew (1831) was first to coin the term 'natural process of selection' in published print and Darwin (1859) was later first to coin the exact yet slyly four-word-shuffled term 'process of natural selection'.

Most importantly,  the IDD method also unearthed that Robert Chambers (anonymous author of the best selling Vestiges mentioned in the text image of his book 'Luck or Cunning' p. 249 directly above), actually cited Matthew's book decades before Darwin and Wallace had put so much as pen to private notebook on the subject of evolution. Furthermore, Chambers was apparently first to be second in print with Matthew's (1831) original term 'natural process of selection' (see the facts newly unearthed in the historic publication record: Sutton 2014, 2015, 2016). Matthew's original four word term was plagairised by Darwin because it is so essential to explain the theory of macroevolution by natural selection, it being (a) natural (b) a process and (c) selection by nature. For the same reason of requiring Matthew's essentially necessary terminology, Darwin and Wallace were also compelled to plagiarise his unique artificial versus natural selection explanatory analogy of differences. Darwin - in a private essay (Darwin 1844) which was later published, even plagiarized Matthew's highly idiosyncratic, arboricultural and foresters, artificial versus naturally selected trees explanatory analogy of differences to make the theory understandable (read that story here).

The above screen shots of the second edition preface (1882) of Butler's 1879 book 'Evolution Old and New' refer to yet another incident where Charles Darwin is nailed by a writer for lying about his behaviour in glory stealing the work of another. Hugh Dower, does an excellent job of explaining the whole debacle on his website (here and archived here).

As those familiar with my research and that of Jim Dempster before me will know, Darwin lied also when he claimed no naturalists had read Matthew's (1831) complex and original 'bombshell breakthrough, ideas before he and Wallace supposedly miraculously replicated them along with Matthew's highly idiosyncratic terms and unique explanatory examples (e.g. Sutton 2015)