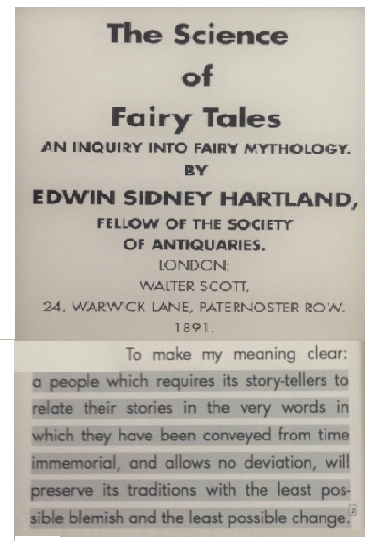 On the inside of  the dust jacket to his new book: "The Knowledge Machine: How an Unreasonable Idea Created Modern Science" Professor Michael Strevens writes:

"...science calls on its practitioners to do something apparently irrational: to strip away all previous knowledge - such as religious, metaphysical or political beliefs - in order to channel unprecedented energy into observation and experiment.'

Interestingly, it was certainly his religious heresy and possibly also his membership, as a Scottish regional representative (see here), of the radical political reformist Chartist movement that led 19th century writers, including some natural scientists (such as john Lindley, who despised and feared the Chartists), to do the dirty on Matthew (see here) or else fear to be associated with his bombshell 1831 breakthrough of the origination of the theory of evolution by what he called the  'natural process of selection.'

Then in the 21st century, the breakthrough of Big Data searching in Google's library of millions of books (Sutton and Griffiths 2018) allowed me (see e.g. Sutton 2015) to find and then to observe in the historical publication record that it is a science myth that no naturalist read Matthew's theory before Darwin and Wallace replicated it (along with many of his essential highly idiosyncratic explanatory examples and analogies). Moreover, I then conducted and experiment (here) to reveal how even to this day the quasi-religious cultish Darwin Industry is involved in  fact denial of what exists in the printed publication record about what 19th century readers wrote on Matthew and his theory before Darwin (1858, 1859) and Wallace (1855, 1858) plagiarized it and then defended their action by claiming no single person had read Matthew's theory before he claimed it was his in a published letter of 1860.

Therefore, it is scientific attitude and techniques that allowed the "knowledge machine" of science, based upon independently verifiable new data, to replace the myth of Darwin's and Wallace's miracle independent conceptions of a prior published theory (that was read and cited by their friends and influencers before they replicated it See Sutton 2017) with the facts of their plagiarism of Matthew and historical and modern day machinations of Darwin fanatics to try to bury the facts of it from the wider public.

The psychological research conducted by Nobel Prize winner Daniel Kahneman found that the idea of "self" we humans have about ourselves and others is related just to one small part of our brains that makes sense of the vast array of chaotic information (biochemical data that flashes up and fades away), which the human organism experiences. Kahneman concluded that the conscious ‘self’ is not fully in control of what humans think and do. The idea of the individual ‘self’ is therefore just a brain accessory that tries to make sense of this vast amount of chaotic data. To do so, the human brain has to simplify and turn that data into stories that are sometimes so simple that they bear little reality to what is outside the mind.

This process gives people the feeling that they are in control, but that is no more than a comforting illusion.

The implications of Kahneman's theory is that you can never really change most people's thinking and behaviour by appealing to rational evidence. In effect, he tells us that human beings live in a simplified dream world and there is nothing you can do about that.

In other words, my ground-breaking book 'Nullius in Verba: Darwin's greatest secret' and the independently verifiable evidence in it is never going to change the minds of the vast majority of scientists and the wider community because the facts in it upset their simple comfort-blanket story about Darwin and Wallace being original genius discoverers, as opposed to glory thieving serial lying science fraudsters by plagiary who managed to hoodwink the scientific community and wider society. 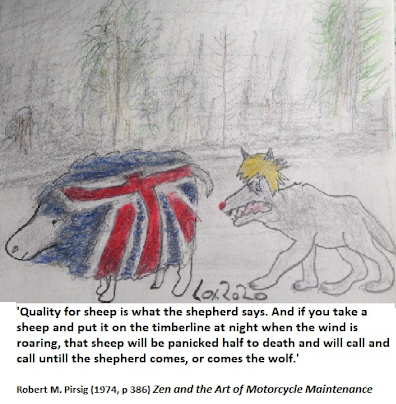 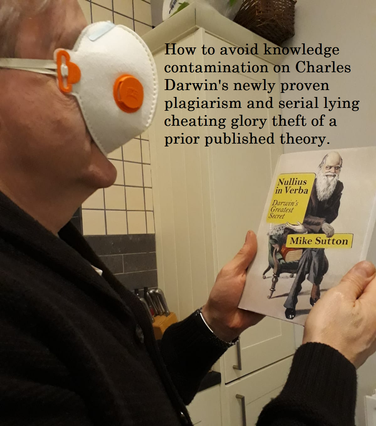 (From the original Best Thinking archive)

On one harsh 19th century winter night, an honest donkey froze where it stood on a Parisian boulevard. At daybreak, the people seeing it so lifelike, tried to shoo and beat it out of the way, not realizing it could not move on because it was dead!

If one encounters a frozen donkey in the road, standing, for all the world as though alive, no amount of reasoning, patience, impatient berating or rational cajoling will entice it to shift its position. The donkey is not merely being stubborn. Why not? Because it is bereft of life. The donkey can think no more, all mental faculties have ceased to be. The only solution is to go around it. Darwinist historians of science are behaving like frozen donkeys. Unable to adapt to a sudden change in their circumstances, they succumb to those circumstances. If they continue to do so they will be circumvented by scholars better able to adapt to the New Data. Once significantly circumvented, Darwinist historians of science will lose their power of occupancy in the literature on the topic of the discovery of natural selection. Once that happens they will shortly become intellectually extinct.

The Frozen Donkey Hypothesis is born of the implications of the obvious catastrophic extinction event impact of the New Data (Sutton 2014, 2017) on Darwinist professional and amateur historians of science, who reveal by their plainly biased responses to it, that they are necessarily concerned – if they are to remain so named Darwinists and not be re-born Matthewists – with ignoring the rational implications of the new disconfirming hard evidence for their prior soft knowledge beliefs in their namesake’s “independent” discovery of a prior published hypothesis that was read, and the book containing it cited, by naturalists who were Darwin’s admitted influencers and associates and correspondents- even though Darwin himself fallaciously wrote in 1860 that no naturalist known to him had read it.

We must now go around Darwin's, soon to be, intellectually extinct Discovery Donkeys because their minds, remaining frozen, are incapable of grasping what happened to them and their disconfirmed unevidenced beliefs about their namesake.

Confirming the theory of natural selection, those most fit to survive after the impact of the New Data will enjoy a power of occupancy in the intellectual niche once occupied by the now extinct, unadaptable, herds of Darwinist Discovery Donkeys.

'The enlightened person accepts the word of authority not as something to which he has to say ‘yes’, but as something to which it is appropriate to subject to critical analysis. The question for the enlightened person therefore is whether the word of authority can stand up to cross-examination before the tribunal of reason. If it can then it is accepted because it is sanctioned not by authority but by reason. If on the other hand it cannot withstand the cross-examination then it has to be discarded, however exalted the source.'

Brodie, A. (2007) The Scottish Enlightenment: The Historical Age of the Historical Nation. Edinburgh. Birlinn Ltd.

“It is therefore in his imagination alone man finds the model of that which he terms order, or confusion, which like all his abstract metaphysical ideas, supposes nothing beyond his reach. Order, however is never more than the faculty of conforming himself with the beings by whom he is environed or with the whole of he forms a part.”

And this pertinent observation on how blind we may be to our own 'institutional bias' leads us to the Frozen Donkey Hypothesis    – which applies by the hard facts that are the premise upon which it stands - as much to Alfred Wallace's (1855; 1858) replication of Patrick Matthew's (1831) prior published hypothesis of the natural process of selection as it does to Charles Darwin's (1842; 1844; 1858; 1859). 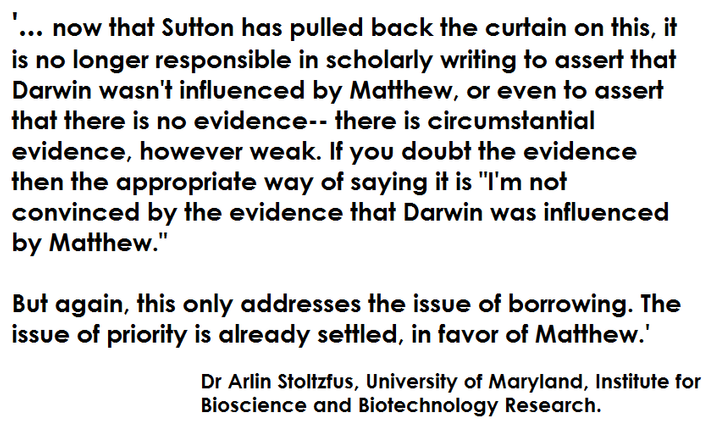 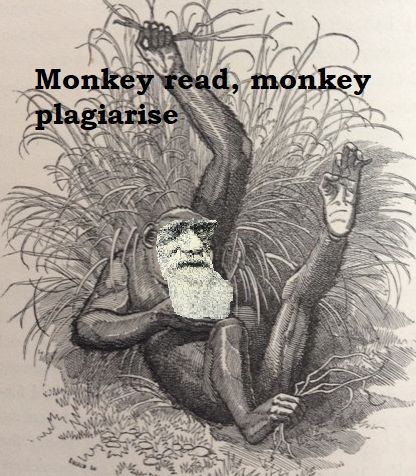 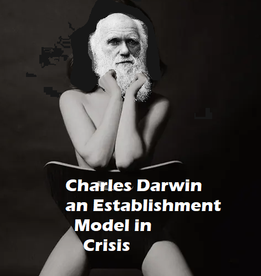 Plagiarism of Original Findings from Research on Plagiarism

In the journal of the Linnean Society, which is the very same journal that published Darwin's and Wallace's (1858) replication of Matthew's breakthrough with no reference to Matthew, Joachim Dagg (2018) - who earlier penned attacking and laughably pseudo-scholarly  factually wrong poorly researched hatchet job reviews of my book (Sutton 2014 and 2017) - jealously plagiarises my discovery that Selby cited Matthew. He is a plagiarist in this regard because he used my newly discovered Selby cited Matthew data without referencing my prior publications, which he knows full well to be the original published source of its discovery. Effectively passing my original discovery off as though it is his own, Dagg fails to acknowledge me for discovering it and so influencing him to use it (as Michael Weale 2015 rightly did in a preceding Linnean Journal article). Later on Wikipedia, Dagg discusses this failure to cite me on the talk page of the pseudo scholarly Wikipedia page about Patrick Matthew to the malicious, obscene and totally obsessed harassing Darwin superfan and cyberstalker Julian Derry (here). For good reason, Derry who has maliciously stalked one of my graduate students, other associates and esteemed colleagues, such as Professor Mark Griffiths, has been made to delete his sad weirdo, libellous malicious harassment blog about me and those others (see here) and the New Data by the legal department at Nottingham Trent University. None of these verifiable facts bode well for what genuine scholarly historians of science will have to write about the shabby Linnean Journal, in which Dagg thanks Derry, those who have committed plagiarism in it, and have also edited the silly Wikipedia pages about me, and also another about Matthew, in this regard.

Analogously, as we have seen throughout history, newly unearthed facts that are devastatingly unwelcome to fanatics act as an enema causing some to soil themselves in public. That would be a shame if it was not so funny.

For the historical record of laughable shameful behaviour of several biologists toward the New Data, that has crushed their cherished beliefs with independently verifiable disconfirming dreadfully unwelcome facts, fully cited evidence of Dagg's behaviour and that of others, seemingly desperate to side-step the preponderance of new evidence for Matthew’s knowledge contamination of the work of Darwin and Wallace, can be found on another page of this website. It is all recorded and archived (here) for others to use in their scholarship into plagiarism, cyberstalking, abuse, harassment, poison pen letters, science fraud and how paradigm shifts in science are first received by those with a stake in seeking to deny unwelcome facts and so cover them up. Comedians, please help yourselves. 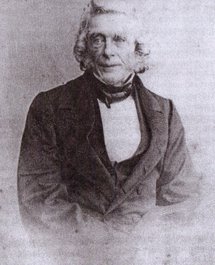 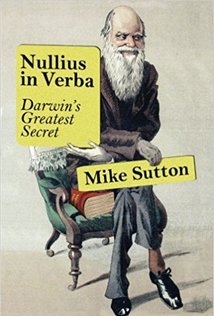 Read two peer reviewed articles on how a new  research method  found the hidden books in the library, which demolish the Darwinist myth that Matthew had no prior influence on Darwin or Wallace. 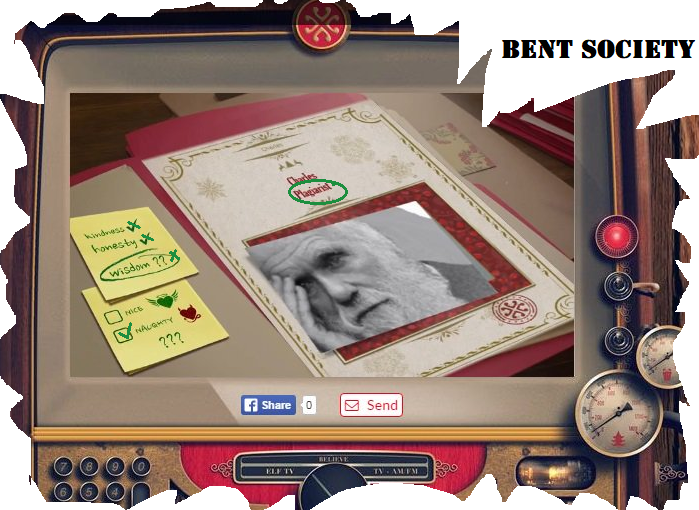