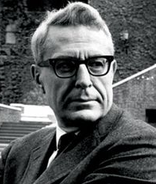 The text below, on Loren Eiseley, is taken from Nullius in Verba: Darwin's Greatest Secret (Sutton 2014), where the full references for the texts cited below can be found.

Consider the following comparative analysis of Matthew's and Darwin's prose that was selected for comparison by the internationally renowned anthropologist and science historian Loren Eiseley (1979):

"Matthew wrote,'Man's interference, by preventing this natural process of selection among plants, independent of the wider range of circumstances to which he introduces them, has increased the differences in varieties particularly in the more domesticated kinds...'

"In his unpublished essay of 1844, Darwin wrote, 'In the case of forest trees raised in nurseries, which vary more than the same trees do in their aboriginal forests, the cause would seem to lie in their not having to struggle against other trees and weeds, which in their natural state doubtless would limit the conditions of their existence...' "

Eiseley was convinced that the number of similarities between these sections of text was too great to be coincidental. However, he would no doubt have been doubly convinced had he spotted that the above paragraph from Naval TImber and Arboriculte (NTA) (Matthew 1831) contains the original Matthew phrase that Darwin (1859) originally four-word-shuffled into "process of natural selection."

Loren Eiseley (1979 – ‘Darwin and the Mysterious Mr X’ pp – 72-73) was convinced, therefore, that Darwin must have read Matthew’s 1831 book in or before 1844 when Darwin replicated Matthew's original prior published ideas in his private essay of 1844.

To repeat this important point, Eisleley discovered that in that very essay Darwin replicated Matthew’s highly idisyncratic forrester and arboricultural example of the differences between plants grown in nurseries and those naturally selected in the wild. This is a major discovery on this topic and Eisleley deserves his place in the history of plagiary research discoveries for it.

If Darwin apologists are not yet convinced by this combined discovery that Darwin had read NTA by 1844, then they will need to explain why. As Eiseley (1979) discovered, Darwin's same paragraph re-appears—shortened, but with additional information from NTA—in Darwin's (1868) book The Variation of Animals and Plants under Domestication, where Darwin actually cites Matthew's 1831 book.

Surely if Darwin's use of the example of trees raised in nurseries versus those in nature had not been lifted by him in 1844, from Matthew, then why else did he cite Matthew as the source when he reproduced the exact same idiosyncratic example 24 years later in 1868—seven years after Matthew challenged him for replicating, without citation, his 1831 discovery of the law of natural selection and passing it off as his own, independent, conception?

More detail on this topic can be found  on the Matthew's Analogy page of the website you are currently reading. Here.

In addition, interpreting Darwin's palpably disingenuous excuses about the title of NTA, and its subject matter of trees being unrelated to his interests as evidence of his guilt, Eiseley concluded that Darwin must have taken the concept of natural selection from Matthew. He wrote (see Eiseley 1979, pp. 71-73):

"The fact that Darwin, as has been seen, speaks forcefully of his long and persistent searching of horticultural and agricultural sources, makes it less easy to accept his ingenuous disclaimer that 'one may be excused in not having discovered the fact [i.e. natural selection ] in a work on Naval Timber.' "

In that later text, to which Eiseley provides us, Darwin (1868) wrote:

"Our common forest trees are very variable, as may be seen in every extensive nursery-ground; but as they are not valued as fruit trees, and as they seed late in life, no selection has been applied to them; consequently, as Patrick Matthew remarks, they have not yielded different races..."

Wood (2009), however, defends Darwin against this alleged plagiarism. He does so by taking to task Davis (2008), who accusingly referred to these exact same paragraphs selected by Eiseley. Wood concluded that a comparison of the paragraphs alone reveals that Matthew and Darwin had such fundamentally different ideas about how the process of natural selection worked that Darwin could not possibly have plagiarized the concept from Matthew.

In point of fact, Wood's reasoning is not just completely wrong, it's bizarrely so. When one compares these paragraphs, two things stand out regarding the obvious similarity of ideas. Firstly, there is the replication of Matthew's use of plants as examples, secondly, the replication of Matthew's unique use of artificial selection as an explanatory analogue for natural selection. And thirdly, there is the fact that Darwin is writing about a core explanatory theme in NTA, which is the difference between trees raised in nurseries and those selected by nature. Moreover, seven years later, Darwin actually cites Matthew's NTA for this previously un-cited text.

One thing we can be 100 percent sure of is that there is nothing original in Darwin's 1844 unpublished paragraph on trees in his privatley written essay, because its content and the ideas that underpin it were published by Matthew in both the main body of NTA and in its appendix in the preceeding decade.

If Darwin never got this example directly from Matthew's (1831) text in 1844, then he got it from his friend David Low's (1844) book. And Low would have more likely than not got it from Matthew, since he is apparently first to replicate two apparently unique Matthewisms in his book of of 1844.

Pseudo scholarly Darwinites refuse to cite Eiseley's bombshell discovery of hard evidence of Darwin's Plagiarism of Matthew. And you won't find it mentioned on the Darwin Cult pages of Wikipedia either. Yet what Darwin wrote in hs 1844 private essay is real. It's as real as a fossil in the fossil record. Perhaps the Darwin faithful think those lines in Darwin's essay were put there by a supernatural demon? Try adding the facts on Darwin's replication, that were discovered and published by Eiseley, to the Wikipeda pages of Charles Darwin and Patrick Matthew and see how long the facts are allowed to remain there before they are brute censored by the cult. If you then add them again they will probably delete your account. They are that desperate to hide these and other proven facts about Darwin's science fraud by proven plagiary and lies.

I have written more on what leading biologists did to fraudluently mislead the scientific community on Loren Eiseley in my book 'Nullius in Verba: Darwin's greatest secret.'