The Chartist Regional Leader, Patrick Matthew was a delegate of the 1839 General Convention of the Industrious Classes elected by the "Radical Reformers of Great Britain" - for enactment of The People's Charter.

Matthew named as a delegate alongside other famous electoral reform leaders in 1839 such as William Lovett, Henry Vincent, Fergus O'Conner, John Collins and John Frost. Here. The privileged landowning classes, including Charles Darwin and many other naturalists feared those radical  Chartists Here

A copy of Matthew's (1839) book "Emmigration Fields", which takes his ideas on natural selection v social artificial selection forward for human beings, bears his signature on a line written by him to Social Reformer Thomas Atwood (here and archived HERE): "Thomas Attwood, who presented the Chartists' petition for universal suffrage and other democratic rights to the House of Commons in June of 1839." (See "History of  Science" here.)

Robert Chambers who cited Matthew's (1831) Naval Timber and Arboriculture pre 1858 was opposed to working classes getting the vote. John Lindley, who thwarted Matthew's attempt to achieve scientifiic/botanocal naturalist kudos through importing and propagating the first giant redwood trees in the UK, drilled a militia to fight the Chartists here.

Did Matthew's Chartist connections play a role in what 19th century establishment naturlaists did to deny him his due priority for orginating and prior-publishing the theory Darwin and Wallace plagiarised?  That certainly seems to be a likely case.

Matthew's 1831 book "On Naval Timber" heavily criticised the landed gentry and middle classes for thier "artificial selection" stupidity of not intermarrying with the best of the lower classes - leading to the in-breeding of dullards in the upper classes. This led Matthew to write "Emmigration Fields" (Matthew 1839), with its recommened and detailed rationalised arguments for the wroking classes to emmigrate to the so-called "New World". His Scots New Zealand Company cited that book in its prospectus, which he also authored (Matthew 1839), and took the same criticisims of effective slavery of the poor in Britian forward. All these highly critical and radical ideas were touched upon in "On Naval Timber" (Matthew 1831). Small surprise then that Charles Darwin's favourite upper-class gentleman's club journal included a criticism of Matthew's Scots New Zealand Vompany, advising peopile not to invest in it because Matthew was its director. See the review of Matthew's "Emmigration Fields" in The Athenaeum (1839, p. 477) : "The authorship of this project and tht of the South Australian Colonization, belong we believe, to the same individual [they mean Matthew of course]. Government will, we suppose, be thus forced into recognition of the scheme for colonization; which it is unable to prevent, but we hope that the interest which attaches to the project as a politicial experiment will not conspire with the rank and popularity of the nobleman who patronizes it, to divert attention from the pecuniary speculation which may possibly lurk beeath. We cannot imagine any schemes more to be deprecated than bubble colonies." (Taken here from Sutton [2014] "Nullius in Verba: Darwin's Greatest Secret"),Thinker Media, USA. 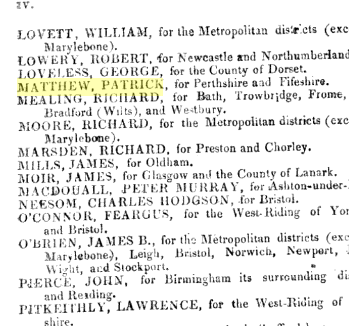