In his  famous book Nonscience, first published in 1971, top scientists Brian J Ford wrote on Charles Darwin's misappropriation of the theory of evolution by natural selection by opportunistically seizing the prime moment when society was finally ready to accept such heresy, that had been prior published by others but stamped in the gutter by Christian naturalists. Robert Chambers (who new Big Data research I conducted - e.g. see Sutton 2015 - revealed had earlier twice cited publications by Matthew containing his original bombshell breakthrough in the area) had cleared the way with his best seller The Vestiges of Creation - and both Darwin and Wallace admitted that Chambers influenced them. Wallace went even further and wrote that Chambers was his greatest influencer.

'Charles Darwin... writing his thesis at exactly its most fashionistic time, when everyone was discussing it. He wasn't the first to propose his particular interpretation, of course, but his use of fashionism and the clothing of the argument in detaied observations of animals in general made the whole project an obvious winner.'

Ford built upon this critical observation in 2011 in an article entitled Darwin: The Microscopist Who Didn't Discover Evolution. By Brian J. Ford. The Microscope. 59:3, 2011. pp 129-137. In that article Ford wrote:

'Darwin neither discovered evolution as a general concept, nor did he discover evolution by natural selection.'

'Darwin is set on a pedestal as though he were Einstein or Copernicus, and anyone doubting adherence to this conventional view risks ostracism. In science, as much as in religion, we can find extreme views that fly in the face of realities.' Click here to read that article.

In this new edition Ford (2020, pp 72-73) goes much further to reveal that Darwin plagiarised the entire theory from Patrick Matthew's (1831) book:

'Some 27 years earlier, the theory had been published by someone Darwin didn't know - Patrick Matthew. ... Darwin omitted mention of these earlier investigators when he wrote his book. ...Matthew on reading Darwin's words was was horrified and he complained. Charles Darwin wrote back: "I freely acknowledge that Mr Matthew has anticipated by many years the explanation which I have offered on the origin of species under the name of natural selection. If another edition of my book is called for, I will insert a notice to the foregoing effect." He didn't. Three editions of Darwin's book came out before Matthew's name crept in - and that is the secret of Darwin's success. His theory wasn't original, but he didn't say so. The earlier publications had caused growing interest in evolution, so that - by the time the Origin of Species appeared - everybody wanted to know more. That's the rule. Fashionism is what matters. Not originality. And certainly not integrity.'

In 2020 Ford purchased, read, and then reviewed Nullius in Verba: Darwin's greatest secret on Amazon. Here. 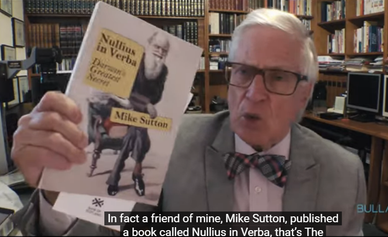 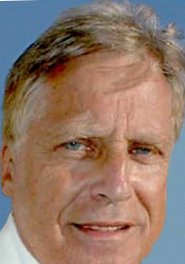 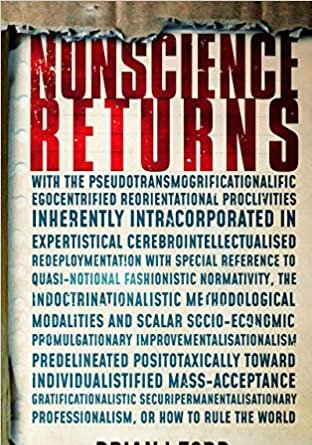 Top scientist Brian J Ford in an excellent video on plagiarism and other academic misconduct in science. Ford holds up a copy  of "Nullius" as hard evidence of Darwin's plagiarism of Patrick Matthew's prior published theory of evolution by natural selection.

NEW YORK HONOR
Exciting day - an online meeting to comemmorate my lifetime with microscopes. Non-academic people may misunderstand 'interdisciplinarian' - it could connote someone who was very strict. And strict with everybody, even if they came from another country ... pic.twitter.com/XqorDRh3nR

Brain J. Ford on the Sonia Poulton show in January 2022

When I contacted Professor Brian Ford to let him know that my "Selby cited Matthew discovery" research had twice been plagiarised in the Biological Journal of the Linnean Society it was me to who Brian responded with what he says in the above video.

"If you’re in the public eye and you make an impression, people are going to steal your work. It's actually the ultimate compliment. If in science you haven't been plagiarised, it's because you haven't done anything decent. The minute you do, some miserable two-faced, dishonest bastard is going to come along and steal your work and claim it's his own."