The first ever published images of the three letters sent by Charles Darwin and his wife (two from Darwin and one from his wife) to Patrick Matthew are on this website.

One of these original letters reveals that the Darwin Correspondence Project has made a striking plagiarism error by failing to cite the origin of the mistranscribed secondary source they used.

They wrongfully give the impression by their citatation that their own published transcriptions come directly from the original letters in Edinburgh National Library. But they don't.They originate from a mistranscribed secondary published source dating back to 1912.

See the letters and read the facts HERE.

BigData Discovery of Darwin's plagiarism of Matthew's prior-published breakthrough in the news: 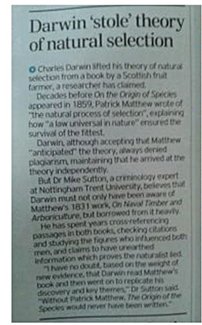 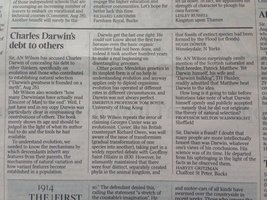 Hugh Dower's and Milton Wainwright's letters are publshed in the Times newspaper (London) on 29th August 2017. They each criticise A.N. Wilson's article in the Times (26th Aug, 2017) on his forthcoming book on Darwin. Dower's text on Matthew was edited out of his letter by the Times.

How long is it going to take before historians take note of what Darwin himself openly and publicly accepted - namely that he did not originate the theory of natural selection? 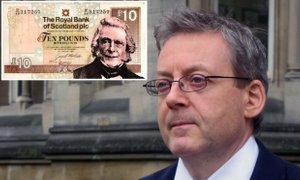 Read all known Darwinist criticisms of the significance of the New Data versus my rebuttals: HERE 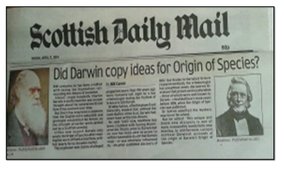 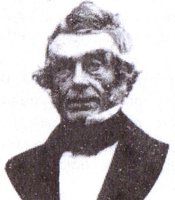 1st June 2015: Announcing 'Sutton's New Data Hypothesis'. An invitation to others to test it in the field. 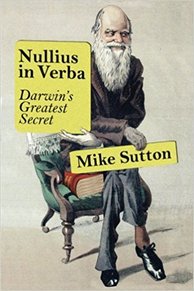 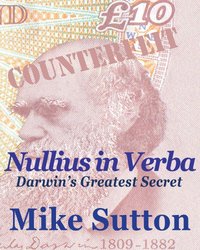 From November 2017, you are advised not to download any version of this e-book, because the illegally hacked and disseminated hacked files are likely to be infected with hacker malware by those sharing and disseminating them. Moreover, the book's original academic content is likely to have been altered by the criminals involved.

Available only from all Amazon sites, good Bricks and Mortar Bookshops and Libraries World Wide. Bogus fake versions are being sold on various other websites online by criminal book pirates and identity fraudsters.

New Evidence Based Argument: Not only was Matthew (1831) the first to discover and have published the full hypothesis of natural selection, he was also the first to use the powerful Artificial versus Natural Selection Analogy of differences to explain it.  This means that both Darwin (1844, 1858, 1859)  and Wallace (1858) replicated Matthew's prior published discovery without citation as well as replicating his powerful and unique explanatory analogy for it. {Here}.

A proposal to debate the meaning of what has newly been discovered with BigData research about who they knew, and who influenced them, who really did read Matthew's theory before Darwin and Wallace replicated it and each claimed it as their own independent conception and then excused themselves (with Darwin blatantly serial lying) by claiming no one / no naturalist read it before they replicated it. Matthew had already informed Darwin in the press that the exact opposite was true.

Ton Munnich (M.A). is a Dutch historian, and author of the essay

“Genetics or Darwinism?”, which is freely accessible here

ANOTHER BOMBSHELL FALLS ON THE DISHONEST DARWIN INDUSTRY 22 April 2015

In addition to prior-publishing the complete hypothesis of natural selection 27 years before Darwin, which we newly know (Sutton 2014 and 2017) was - contrary to the dusty old Victorian science myth and started by Darwin in 1860 - read by other naturalists.  Darwin personally knew four of the seven naturalists who, it is newly discovered, cited Matthew's book pre-1858.  Three of the four (Selby, Loudon and Chambers) significantly influenced Darwin and Wallace on the topic of natural selection pre-1858. Matthew (1831) also coined the powerful Artificial versus Natural Selection Explanatory Analogy. This means that we have now even more confirming evidence of Matthew's massive influence on Darwin. Because in 1831, Matthew coined the world's most powerful analogy to explain his unique discovery of the world's most important scientific theory. So important was that unique analogy - so influential - so powerful - Darwin (1859. p. 7)  used it to open "The Origin of Species"  when he wrote: 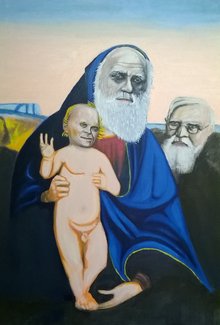 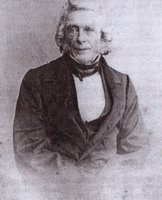 This oil painting, by the Nottingham based British artist Gabriel Woods, showing Darwin holding Patrick Matthew as his own child.  Paying homage to religious pictures of  the Virgin Mary and child, this is a mesmorizing pictorial analogy of Darwin's and Wallace's claims to have each conceived the theory of natural selection independently of Patrick Matthew's (1831) prior published book, which expert Darwinists agree contained the full theory 27 years before Darwin's and Wallace's papers were read before the Linnean Society in 1858.

The picture was commissioned, in light of new data that proves naturalists well known the Darwin and Wallace read and then cited Matthew's book before going on to play roles at the very epicenter of influence on the pre-1858 work of Darwin and Wallace on natural selection. The Blessed Virgin St Mary's conception of Jesus of Nazareth, is a miracle because she became pregnant with the child of "God" whilst surrounded by men who were fertile to some unknown degree. The analogy is perfect because so too were Darwin and Wallace surrounded by man whose brains were fertile - to some unknown degree - with Matthew's unique ideas. Therefore, in the final analysis, if Darwin and Wallace did not conceive Matthew's unique discovery, name for it, examples of it in nature, and his artificial versus natural slection analogy of differences to explain it, by some kind of 'knowledge contamination,' then they must surely have each been mysteriously endowed with a miraculous and divine cognitive contraceptive device (MAD CCD). Personally, I don't think belief in miracles has any rational place in helping us to tell the veracious history of the discovery of the theory of natural selection The probability that Darwin and Wallace lied when they each claimed to have independently discovered natural selection seems more likely than not. The New Data and a wealth of further evidence about their lies and deceit suggests Darwin and Wallace committed the world's greatest science fraud by deliberately plagiarizing Matthew's book. 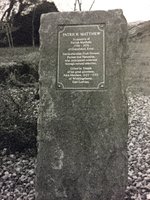 Memorial to Matthew (not a grave headstone) in Carse of Gowrie. Placed by Patrick Matthew Society 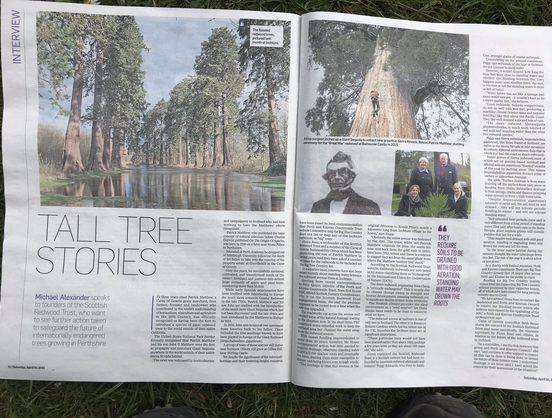 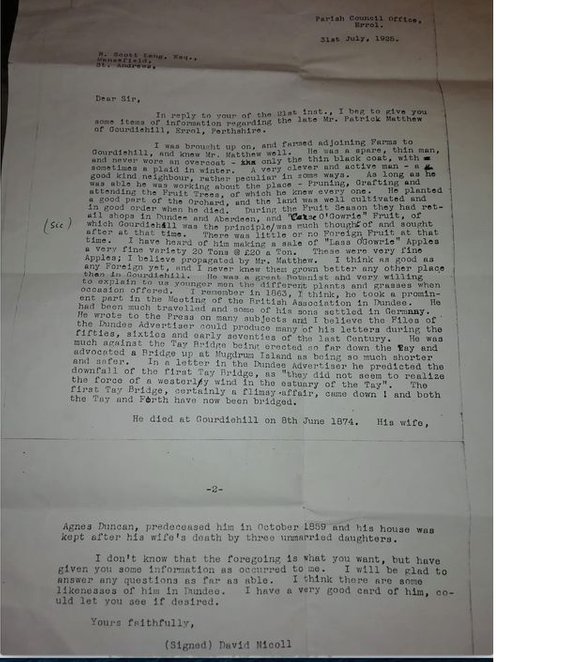 Many thanks to Fiona Ross of the Carse of Gowrie Sustainability gorup for sharing this 1925 letter about Patrick Matthew  in 2021.

The letter is typed by David Nicoll of the Parish Council Office, Errol in the Carse of Gowrie.

Matthew is buried in Errol churchyard. The letter was found by Liz Roberston, after finding it in family papers. The letter is dated 1925, to a Mr Lang of St Andrews. This letter confirms the burial record for Errol Churchyard, whch shows Matthew's wife Agnes (nee Nicol) Mathew was buried in October 1859, and not in 1857 as Calman recored in 1912.