Being famous and influential Scottish scientists, both Patrick Matthew (generally overlooked true originator of the complete theory of macroevolution by natural selection) and John Claudius Loudon are hailed as having each played major roles in the great Scottish Enlightenment  (Russell 2014).

Both were polymath scientific naturalists. Moreover, both were noted botanists because each had author abbreviations in botanical works. Matthew's (1831) book 'On Naval Timber and Arboriculture' was listed by the Arcana of Science (1832) as among the few new science books published in 1831 and was cited in German as the work of the author whose experiment on the effects of lightning on plants was recorded by Robert Jameson (1831) the famous Professor of Biology at Edinburgh University, who taught Charles Darwin. For his part, Loudon's Magazine of Natural history bore on its title pages (e.g. here) the fact the he was a fellow of the elite scientific naturalist club the Linnean Society, Zoological Society of London and several other naturalist societies overseas. Loudon was a co-author with the famous botanist Professor John Lindley, who was the best friend of William Hooker, who was in turn the father of Darwin's best friend Joseph Hooker. Joseph Hooker once wrote that Loudon was better than many other European naturalists put together. Most importantly, Loudon was Chief Editor of the Magazine of Natural History,

Furthermore, as the fully cited and therefore independently verifiable evidence in my original 1st edition  600 page Kindle e-book 'Nullius in Verba: Darwin's greatest secret'  reveals (Kindle book temprarily withdrawn due to book piracy), the facts show that Matthew and Loudon may have known each other, because in 1803 Loudon designed the landscaped grounds of Scone Palace at the time Matthew, aged 13 years, was living on those grounds at his birthplace Rome Farm. The farm stood on what became the landscaped parkland that exists there to this day. This year, during the Patrick Matthew Festival Weekend, Matthew's third great grandson Howard Minnick and I visited Scotland and found the very spot where Rome Farm once stood.

In 1832 Loudon cited Matthew's (1831) book, noting he appeared to have something original to say on the "origin of species", no less.  In 1860, Matthew infomed Charles Darwin that Loudon had written this review of his book.

“One of the subjects discussed in the appendix is the puzzling one of the origin of species and varieties; and if the author has hereon originated no original views (and of this we are far from certain), he has certainly exhibited his own in an original manner.”

Loudon was subsequently editor of the journal that published two of Blyth's famous pre-1859 influential papers on natural selection. Darwin noted from the third edition of the Origin of Species onward (Darwin 1860) that Blyth was his most prolific informant on such matters.

Pre-1859, John Loudon went on to cite Matthew's (1831) bombshell breakthrough book many more times in his botanical books. Most significantly, Darwin's private notebook of books he read before 1859 reveals he read two of those Loudon books (Loudon 1831 and Loudon (1838)  that cited Matthew's book containing his bombshell breakthrough, the same breakthrough that Darwin would later serial lie (after Matthew had informed him in 1860 that the exact opposite was true) to claim variously went unread by any naturalist, and then by anyone at all, and was unread by himself before he replicated the idea and referred to it forever after as "my theory", even after he was forced by Matthew to admit that Matthew got there first. See my academic journal articles on this topic Sutton 2014 and  Sutton 2015 for the expert independently peer reviewed proof of Darwin's lies and the newly discovered routes for Matthewian knowledge contamination of the pre-1858 brains of Darwin and Wallace.

For the sake of veracity, historians of science, biologists and all of us concerned with veracity should surely move beyond the sly myths started by Darwin about Matthew that are repeatedly regurgitated by credulous myth parroting 'Darwin scholars'.

Read the facts you have a right to know and then make up your own mind about the true original discovery, and pre-1858 publication, of the full theory of macroevolution by natural selection and Darwin's glory stealing lies and plagiarism to claim foremost priority for it.

In addition to the 600 page Kindle edition, Nulllius is available on all Amazon sites and from all good book shops as a paperback. Moreover, paperback 200 page Vols. 2 and 3 are forthcoming).

Nullius in Verba is available as an abridged 200 page paperback (vol 1) from all Amazon sites. 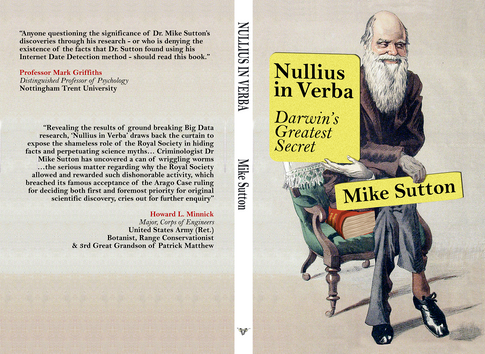 Please be aware that it is newly discovered that readers and writers of the works produced by the so-called Darwin Industry are likely to be suffering from Loudon-Naturalist-Blind Syndrome (NLB syndrome) which is the inability to see the words "Loudon" and "Naturalist" along with a few others if those words prove that other naturalists did read Mathew's (1831) prior publication of the full original hypothesis of natural selection before Darwin and Wallace replicated it.  {Details of the 2015 discovery of NLB: here}.

The condition was initially contracted by Charles Darwin - who then spread it as a toxic super-meme in 1860, when he wrote the following words after having been informed in writing that the naturalist Loudon definitely did read Matthew's ideas:

(1) Darwin April 21 1860:  "I think that no one will feel surprised that neither I, nor apparently any other naturalist, had heard of Mr Matthew's views, "

(2) Darwin April 25 1861  (letter to the famous French naturalist Quatrefages de Bréau): "I have lately read M. Naudin's paper; but it does not seem to me to anticipate me, as he does not shew how Selection could be applied under nature; but an obscure writer on Forest Trees, in 1830, in Scotland, most expressly & clearly anticipated my views—though he put the case so briefly, that no single person ever noticed the scattered passages in his book."

' Unfortunately the view was given by Mr. Matthew very briefly in scattered passages in an Appendix to a work on a different subject, so that it remained unnoticed until Mr. Matthew himself drew attention to it in the Gardener's Chronicle,' on April 7th, 1860.'

A Test to self-screen for the existence of LNB

Try to see somewhere in the following texts written by Patrick Matthew the words:

'In your Number of March 3d I observe a long quotation from the Times, stating that Mr. Darwin "professes to have discovered the existence and modus operandi of the natural law of selection," that is, "the power in nature which takes the place of man and performs a selection, sua sponte," in organic life. This discovery recently published as "the results of 20 years' investigation and reflection" by Mr. Darwin turns out to be what I published very fully and brought to apply practically to forestry in my work "Naval Timber and Arboriculture," published as far back as January 1, 1831, by Adam & Charles Black, Edinburgh, and Longman & Co., London, and reviewed in numerous periodicals, so as to have full publicity in the "Metropolitan Magazine," the "Quarterly Review," the "Gardeners' Magazine," by Loudon, who spoke of it as the book, and repeatedly in the "United Service Magazine" for 1831, &c. The following is an extract from this volume, which clearly proves a prior claim. ..'

(2)  Matthew, P. 1860b. Second letter to the Gardeners Chronicle. Nature's law of selection. Gardeners' Chronicle and Agricultural Gazette (12 May) p. 433.) by way of reply to Darwin's reply

'I notice in your Number of April 21 Mr. Darwin’s letter honourably acknowledging my prior claim relative to the origin of species. I have not the least doubt that, in publishing his late work, he believed he was the first discoverer of this law of Nature. He is however wrong in thinking that no naturalist was aware of the previous discovery. I had occasion some 15 years ago to be conversing with a naturalist, a professor of a celebrated university, and he told me he had been reading my work “Naval Timber,” but that he could not bring such views before his class or uphold them publicly from fear of the cutty-stool, a sort of pillory punishment, not in the market-place and not devised for this offence, but generally practised a little more than half a century ago. It was at least in part this spirit of resistance to scientific doctrine that caused my work to be voted unfit for the public library of the fair city itself. The age was not ripe for such ideas, nor do I believe is the present one,..'

(3) Before going on to edit two of Blyth's influential articles on evolution (which greatly influenced Darwin) The famous naturalist and biologist John Loudon’s review (1832): of Matthew's (1831) book contained the following sentence:

‘One of the subjects discussed in this appendix is the puzzling one, of the origin of species and varieties; and if the author has hereon originated no original views (and of this we are far from certain), he has certainly exhibited his own in an original manner.’

How did you do?

If you cannot see the five words and two phrases then there most certainly is something apparenlty desperately Darwinist going on in your biased brain. We are working on a cure. Meanwhile, to reduce NLB infection rates you are advised not to write anything on the topic of the discovery of natural selection.

Please note that if you are not infected with NLB, you can receive lifetime immunity by reading Nullius in Verba: Darwin's greatest secret - available worldwide from all Amazon books stores.

In addition to Charles Darwin, other there are many other highly famous and less famous sufferers of LNB. Sufferers include the world's leading Darwinist Sir Gavin de Beer - Royal Society Darwin Medal winner - who wrote in his Wilkins Lecture for the Royal Society (de Beer 1962 on page 333):

"...William Charles Wells and Patrick Matthew were predecessors who had actually published the principle of natural selection in obscure places where their works remained completely unnoticed until Darwin and Wallace reawakened interest in the subject.'

'The person who has the soundest claim for priority in establishing a theory or evolution by natural selection is Patrick Matthew (1790-1874). He was a wealthy landowner in Scotland, very well read and well traveled (Wells 1974). His views on evolution and natural selection were published in a number of notes in an appendix to his work On Naval Timber and Arboriculture (1831). These notes have virtually no relation to the subject matter of the book, and it is therefore not surprising that neither Darwin nor any other biologist had ever encountered them until Matthew brought forward his claims in an article in 1860 in the Gardener's Chronicle.'' 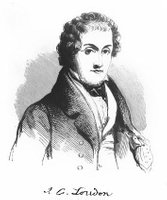 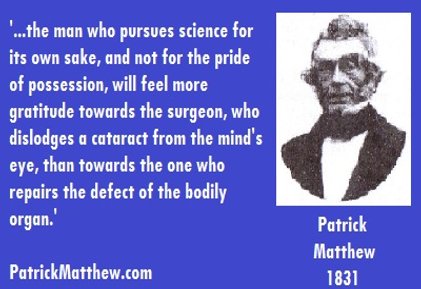 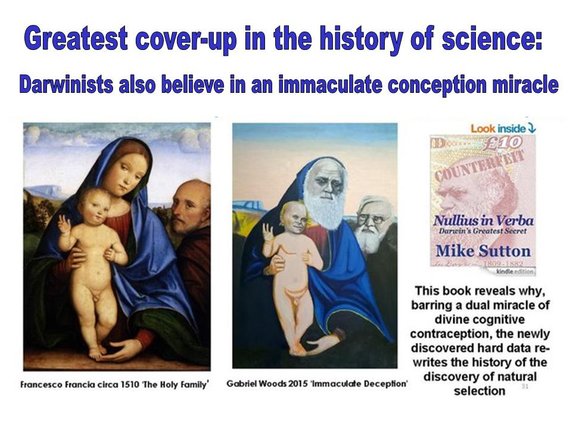 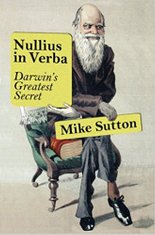 Nullius  in Verba: Darwin's greatest secret is the hard-fact-led mythbusting book that re-wrote the history of the discovery of natural selection with new BigData made discoveries of the once hidden books that reveal who Darwin and Wallace knew who really did read Patrick Matthew's prior publication of the full theory of natural selection before Darwin and Wallace supposedly independently  replicated it in 1858 with, supposedly, no knowledge of what Matthew had discovered that their friends and influencers had read and actually cited in the literature before influencing them on the same topic!