A recent review in the Guardian newspaper of the historian A.N. Wilsonwilson’s book on Charles Darwin points out – quite correctly – many of Wilson’s mistakes and his failure to understand what the process of natural selection is. The book review is written by Victorian history expert Kathryn Hughes. However, waxing lyrical in credulous regurgitation of the romance and lies about Darwin’s supposed good nature and original genius, she uses the cliched example of Darwin’s supposed observations of a tangled bank in nature as supposed evidence of his originality. Hughes writes:

‘His most famous motif, the one that everyone remembers because it leaps off the page with such unforced joy, is that of the tangled bank. Based on his daily observations of a stretch of land near his home, Darwin describes a buzzing ecosystem that is home to plants, birds and insects “all dependent on each other”. Here, he implies, is a microcosm for how we too might imagine our lives.’

But, once again, this is just another example of Darwin replicating Patrick Matthew’s (1831) original theory and its supporting examples, explanatory analogies of difference and terminology.

I could add a wealth of examples of how many of Matthew’s prior-published ideas, original terminology, and confirmatory evidence were replicated by Darwin. Those examples are provided in my book “Nullius in Verba: Darwin’s greatest secret ” but – given the tangled bank example used in the Guardian review one should look at what the statistical geneticist Dr Mike Weale tells us about Professor Donald Forsdyke’s observations of Darwin’s tangled bank text and its similarities to an evidentiary example provided by Patrick Matthew almost three decades earlier. The text below is taken from the comments section of Weal’s website “The Patrick Matthew Project” and are addressed to me:

“Mike, were you aware of the following interesting similarity between a famous passage of Darwin’s, and something that Matthew wrote in NTA? I thank Donald Forsdyke for pointing out the Matthew quote (see the end of his last video in his educational video series (https://www.youtube.com/playlist?list=PL59A9C65FB0DCED9E ).

The Darwin quote, from the last paragraph of “On the Origin of Species”, is: “It is interesting to contemplate an entangled bank, clothed with many plants of many kinds, with birds singing on the bushes, with various insects flitting about, and with worms crawling through the damp earth, and to reflect that these elaborately constructed forms, so different from each other, and dependent on each other in so complex a manner, have all been produced by laws acting around us.”

“Look at the broken mound, with its old picturesque trees and tangled bushes; there is the ancient root where the throstle had its nestlings, which are now at large on the leafy boughs, and are tuning their yet unformed notes to melody. Now every twig has raised its new column of foliage to the sun; and branch, and root, and stone, embellished all over in the richest variety of cryptogamic beauty, swarm of insect life.”

The scene is used differently (to contemplate Nature’s laws by Darwin, to contrast beautiful Nature with boring manicured parks by Matthew), but the similarity of the picture is striking.”

NOTE: NTA is an acronym for Matthew’s book ‘On Naval Timber and Arboriculture.’

When will historians face the concrete fully evidenced truth and choose it over the romance and lies about Charles Darwin, which they have been hoodwinked to believe in?

The most telling question is this: ‘Just how many supposed multiple coincidences of this kind are required in the story of Matthew and Darwin to convince scientists and historians that Darwin more likely than not plagiarised Matthew’s prior published discovery of evolution by natural selection, and in doing so committed the world’s greatest science fraud?’ My book is jam packed with them. Jam-packed with independently verifiable evidence of Darwin’s lies and Matthew’s influence on other naturalists known to Darwin and Wallace and his influence on their greatest influencers and their influencer’s influencers before either Darwin or Wallace penned a word on the topic of evolution. How can this be so? Because it is newly discovered those naturalists actually cited Matthew’s book and original ideas long before Darwin and Wallace replicated them. Andl Matthew’s work was cited by naturalists long before Darwin excused his and Wallace’s failure to cite Matthew by lying that no naturalist had read Matthew’s work. It was a lie because Matthew had twice prior informed Darwin that the exact opposite was true.

Darwin, the patron saint of atheists in fact kept the notion of a supernatural being in several editions of his Origin of Species. Read the whole context of his “tangled bank” job from that book and you will see this fact: 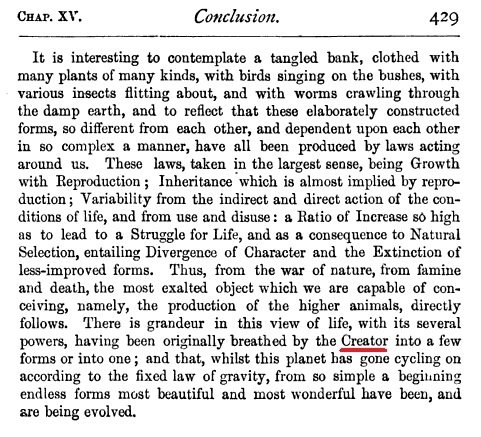 Now, by way of contrast, see how Matthew (1831) , the originator of the theory Darwin and Wallace stole, had the courage – years earlier – to commit heresy by mocking such an unscientific superstitious notion: 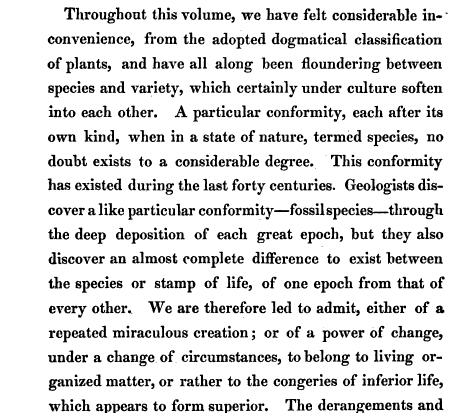 As I fully reveal in my book Nullius, it was for such reason as heresy, as Matthew explained to Darwin in the pages of the Gardeners’ Chronicle of 1860, that his work was banned by libraries and renowned university academics feared to repeat his ideas for fear of pillory punishment. But you won’t read those facts in any ignorant Darwin bashing book penned by a born again creationist, nor in any penned by a credulous and biased, cherry-picking, Darwin worshipper. 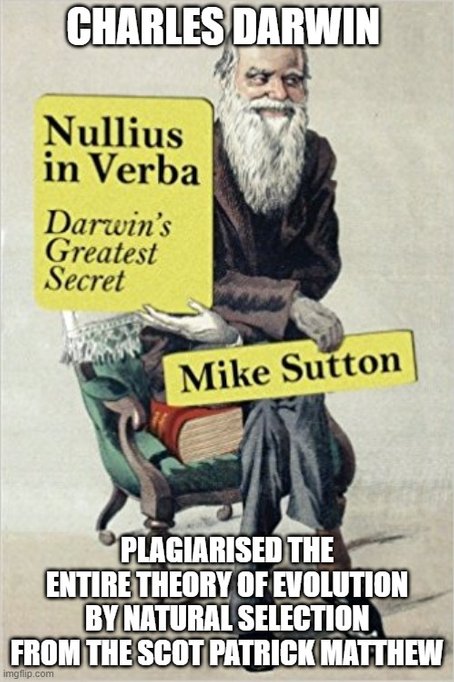