Although Matthew's great granddaughter wrote that he was an atheist (Sutton 2014 e-book Nullius in Verba: Darwin's greatests secret), and although his 1831 book mocked the church, priests and the notion of divine miraculous creation and extinction of species, what he wrote elsewhere suggests he believed in intelligent design later in life, and some, but not I, think that he did so in 1831 when his hypothesis of natural selection was first published. Please click the following links to learn more:

From the third edition of the Origin of Species onward Charles Darwin (1861) admitted that Patrick Matthew (1831) had published the full hypothesis of natural selection 27 years before he and Wallace (Darwin and Wallace 1858. Darwin 1859) replicated Matthew's original discovery (without citing Matthew).

Darwin wrote in his the historical sketch in the Origin (Darwin 1861):

" The differences of Mr. Matthew's view from mine are not of much importance: he seems to consider that the world was nearly depopulated at successive periods, and then re-stocked; and he gives, as an alternative, that new forms may be generated "without the presence of any mould or germ of former aggregates."

Here, Darwin does two things. Both show us his enormously sly and mockingly disingenuous dishonest character, which he deployed to hoodwink his credulous deifying "Darwinist" groupies for 155 years. Firstly, knowing full well that he is promoting, at Matthew's expense, the then fashionable (but since thoroughly debunked - see Rampino) Uniformitarian  principles of his mentor Charles Lyel that geological and meteorological catastrophic events never occurred, Darwin was slyly mocking Matthew by implying he was an ignorant and out of touch biblical (e.g. Noah's  flood) catastrophist.  And secondly, he dishonestly implied that Matthew was muddled because he seemed to believe equally in both the process of natural selection leading to the origin of new species and the alternative possibility that a God did it all. 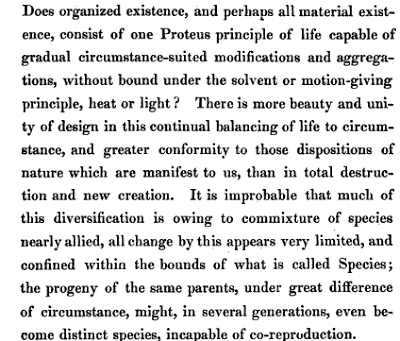 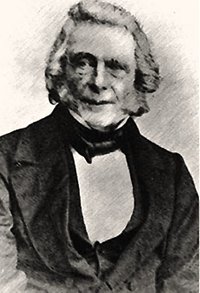 Moreover, elsewhere in his 1831 book (In Note F of the Appendix) , Matthew makes it profoundly clear that he has just handed "God" his redundancy papers as an interfering creator of new and extinguisher of old species:

'We are therefore led to admit either of a repeated miraculous creation; or of a power of change, under a change of circumstances, to belong to living organized matter, or rather to the congeries of inferior life, which appears to form superior. The derangements and changes in organized existence, induced by a change of circumstance from the interference of man, affording us proof of the plastic quality of superior life, and the likelihood that circumstances have been very different in the different epochs, though steady in each  tend strongly to heighten the probability of the latter theory. '

Darwin's deliberate and self-serving dishonest portrayal of Matthew as someone less scientific than himself is highlighted by how his own words are more supplicating to the notion of a miraculous "God" existing and first creating species than the man whose prior-published ideas he replicated and claimed as his own Darwin, p.525 The Origin of Species (1861 - 3rd edition):

'There is grandeur in this view of life, with its several powers, having been originally breathed by the Creator into a few forms or into one; and that, whilst this planet has gone cycling on according to the fixed law of gravity, from so simple a beginning endless forms most beautiful and most wonderful have been, and are being, evolved.'

Actually reading what Matthew wrote, as opposed to what Darwin mockingly implied, reveals the dishonest depths to which the great replicating, and hypocritical, wriggler burrowed in order to portray the true Originator, Matthew, as an unscientific crank, so that he, Darwin, could achieve priority over the true originator of the full hypothesis of natural selection.

Veracious historical analysis reveals, therefore, that an old saying has evolved into a new species. Namely: The wise man mocks the mocker. The mocker mocks the man.

DID DARWIN'S PLAGIARISM LEAD TO THE HOLOCAUST?

The Chartist leader Matthew wrote sedition against the upper classes and heretically mocked priests and the notion of a “Creator god” in his 1831 book that containes the original theory of evolution by natural selection. The fact of the matter is that landed gentry member Darwin kept what he called "the Creator" in the Origin of Species. And he most likely did that to avoid having his book stamped into the gutter by the parson naturalists who ran the scientific establishment in the C19th. By way of his plagiarising science fraud of Matthew’s prior published theory in a form acceptable to the scientific community and most people he created the work that was later misused by the Nazis to underpin the Holocaust. This leads to the telling question: “Did Charles Darwin’s plagiarising science fraud cause the holocaust?” See my 2019 blog post on this issue with all the relevant cited text from the work of Matthew and Darwin on this topic.